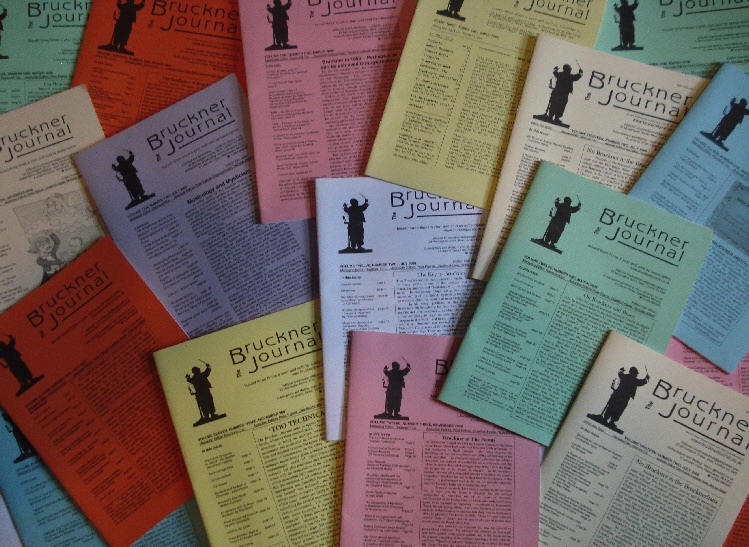 is a publication for all enthusiasts and devotees of Anton Bruckner and his music. It aims to be of interest to musicians, scholars, amateurs and lay enthusiasts, in fact to all lovers of the glorious music of Anton Bruckner, whatever their level of knowledge and expertise.

The founding Editor in 1997 was Peter Palmer. Since March 2005 until November 2016, the editor was Ken Ward.  In June 2016 Michael Cucka became joint editor, taking over as sole editor for the November 2016 issue. The Associate Editors are Dr. Crawford Howie, author of ‘Anton Bruckner: A Documentary Biography’ (Edwin Mellen, 2002), and Dr. Dermot Gault, author of  “The New Bruckner” (Ashgate, 2011). We are all unpaid volunteers, and The Bruckner Journal is non-profit-making.

It is printed in English in the USA, but contributions are received and welcomed from all over the world. It contains articles on a variety of Bruckner-related subjects, concert reviews, CD reviews, book reviews, selected concert listings, news of events of interest to Brucknerians and much else.

Recently, the Journal became associated with the Bruckner Society of America.

This issue contains a wide variety of information about recent performances, articles on aspects of Bruckner's works and their reception, and news of current and future events which will be of interest to Brucknerians.

The Bruckner Journal is published three times a year, in March, July and November - since 1997 - and is available by subscription only.

Anton Bruckner (1824-1896) Austrian composer of music which is amongst the most inspiring, the most ennobling, the most profound in the ‘classical music’ repertoire.

“This publication, then, is for Bruckner enthusiasts everywhere.”

This is a wonderful opportunity for Brucknerians to meet together in pleasant surroundings, hear papers from leading scholars in the field and from other Bruckner enthusiasts. As with the Journal itself, non-academic music lovers need not be intimidated and can be sure they will find a friendly welcome and much to enjoy, to think about and discuss.

The Path to the “Homeric Seas”:  On an Overlooked Aspect of Bruckner's Stylistic Evolution, ca. 1880